New replacement coolant pressure tanks for the Vanagon cooling systems are known to be not nearly as resilient as the OEM ones, they tend to last only a few years. The definitive, fix-it-once answer to that is a welded aluminum box tank from RMW. Competently designed and executed, they are truly bomber. Plus, VW’s exclusive and sometimes troublesome screw-on blue pressure cap is replaced by an old reliable bayonet mount Stant 2-way cap, available everywhere. That also means the standard pressure tester every shop and AP store has can now test the cooling system and the cap; few if any have the proprietary threaded adapters for the VW parts. So, big improvements in several areas at once, and knowing what quality welded parts cost to make, it’s actually quite a fair deal at $250. And if that’s not enough nice things to say about it, the proof RMW had a good thing on their hands is that after pooh-pooing the whole concept on their blog in favor of buying new plastic tanks every 2 or 3 years, GoWesty recently reversed themselves and copied RMW, trying to undersell them at $200.

Having used up one by one my stash of OEM plastic tanks, I finally had to buy a new one, made by Meyle, and that one was at two years when a stone threw the water pump belt and I had a minor overheat. The p-cap did its job and vented off a bunch of coolant, but then coolant was boiling to steam at a rate faster than the small orifice in the cap can let escape, whistling madly. The pressurised steam did this: 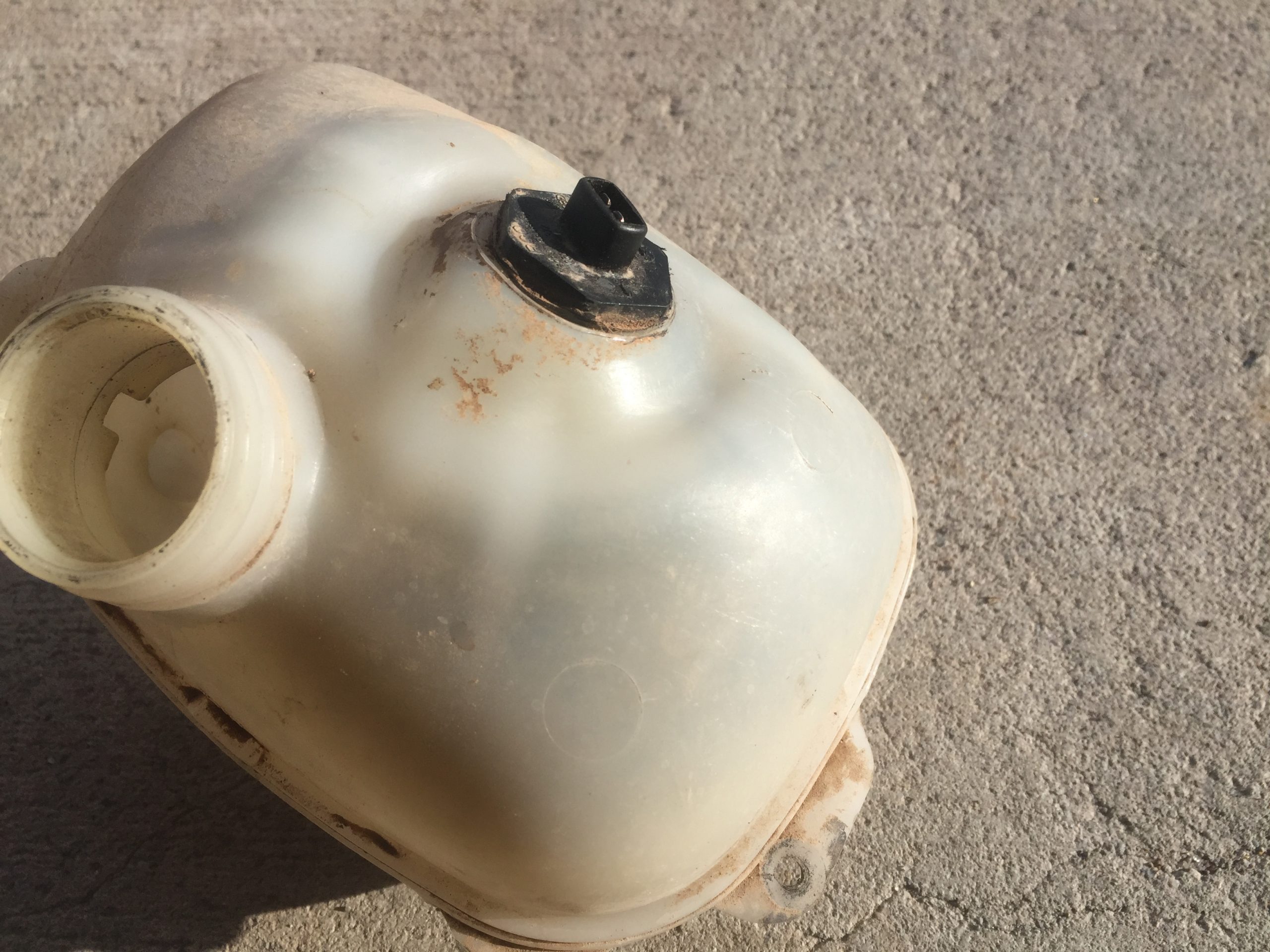 .
It still holds pressure, but I’m not gonna count on it to go another round.

So, time for something better, finally, and RMW’s tank beckons. But I’m doing a start-up, spare cash is very tight, and besides, I have skills and tools, why not roll my own?

I don’t have a TIG welder, though, so can’t weld aluminum. So I ordered a steel radiator neck, thinking I would braze up a sheet steel box tank, but rolling the idea around I knew there would be a lot of challenges and didn’t want to spend a lot of time on this. So I came up with a compromise where I spend a little money, do the rest myself, and get on with other things.

So, shopped the huge number of tanks at Summit, found a welded aluminum box tank that looked like a good candidate for only $100. 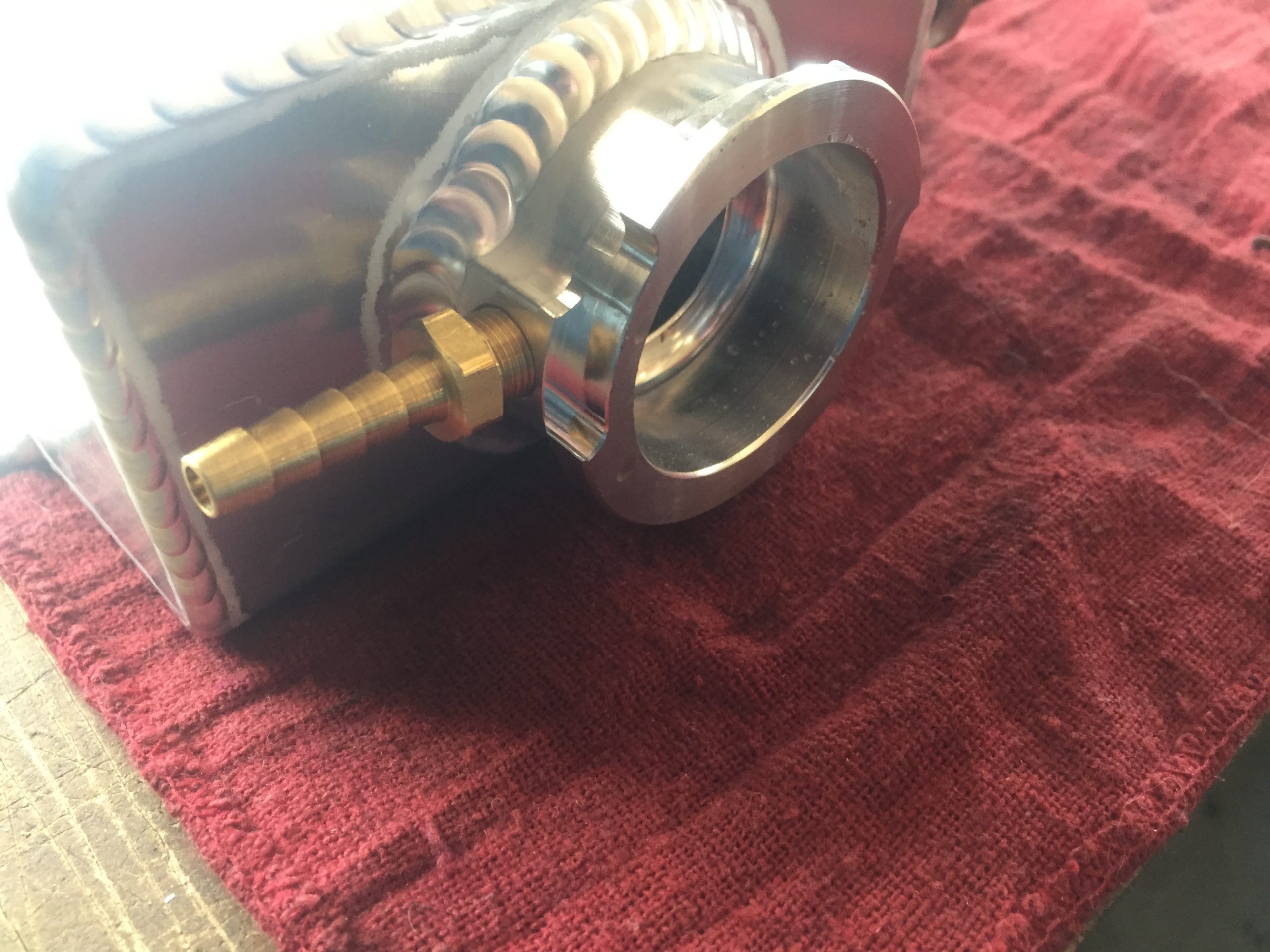 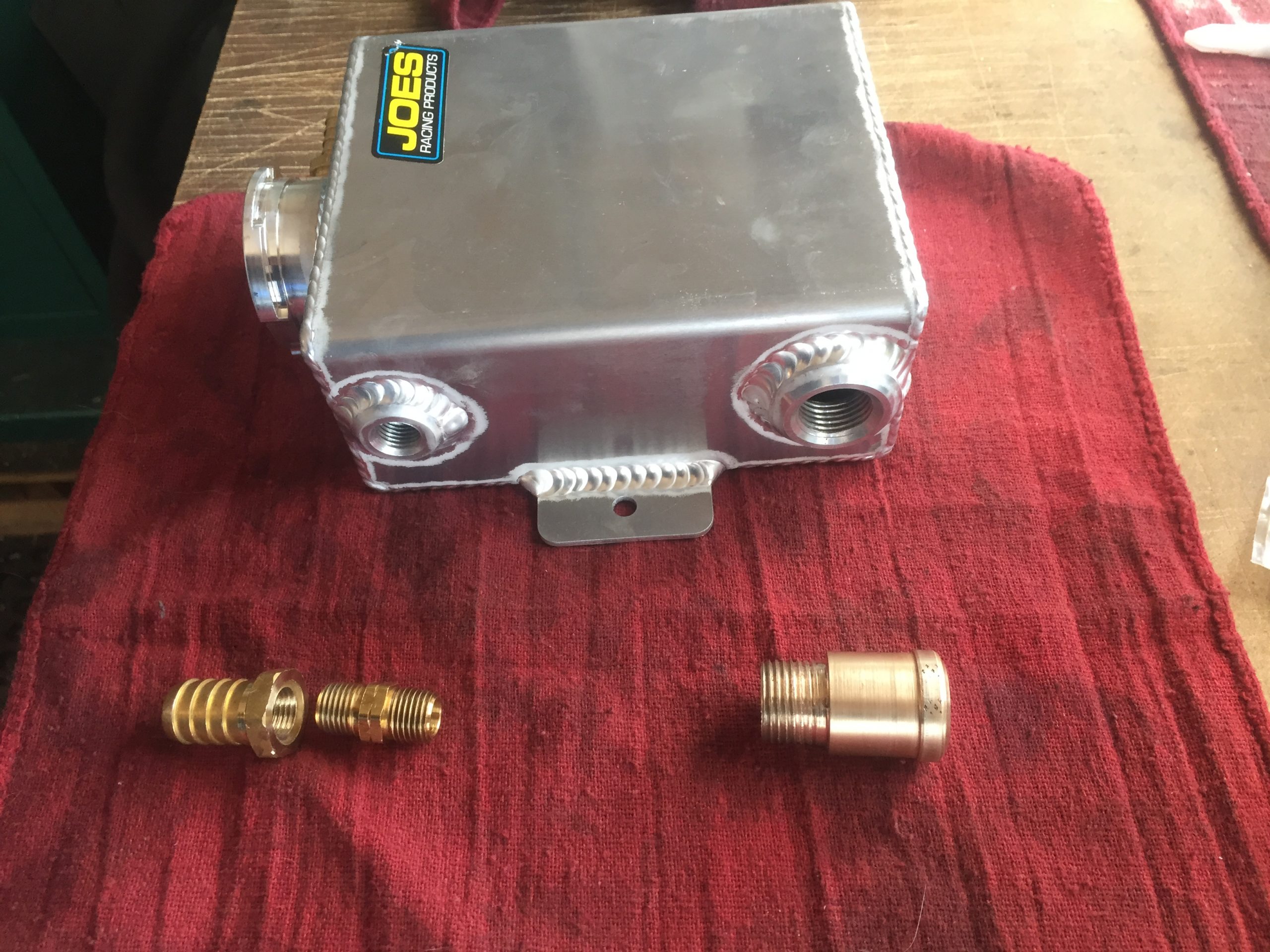 No worries, though, when you have the tools. The lower fitting I spun up on the lathe from some 1.040” thickwall bearing bronze tube stock, that extra mm was perfect to leave behind as the bead. The upper I made from two standard brass fittings, a 5/8” barb to 1/2” MPT adapter, and a 1/4” MPT hex nipple. Cut off the threaded end of the barb adapter, and the ID was perfect for the 1/4″ MPT tap. Bang-zoom, the hoses will fit right up. 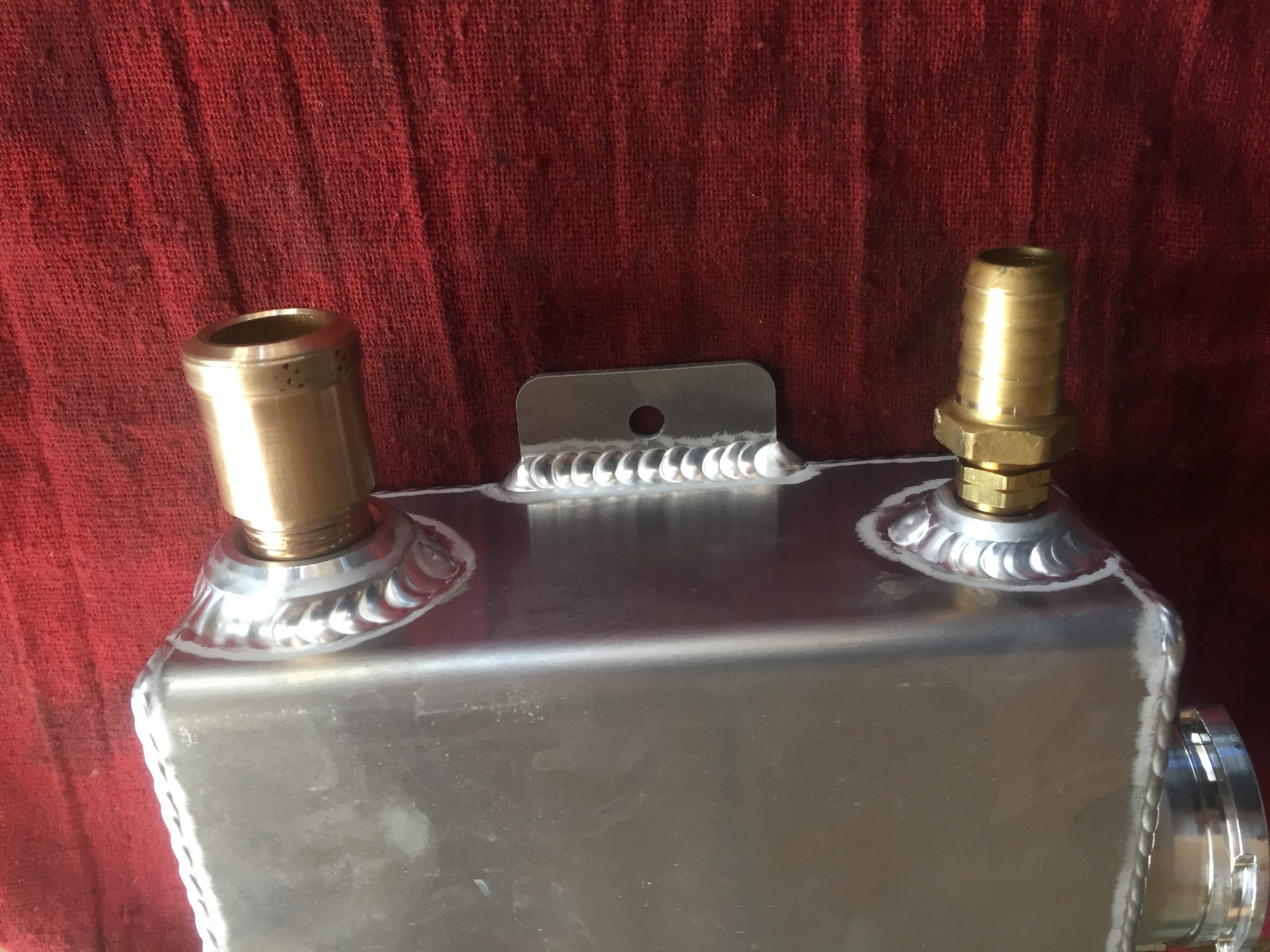 This goes in my Syncro, so the engine sits almost 2” lower in the chassis. The vertical spacing between the two side fittings is wider than the hose nipple spacing on the plastic tanks, but that was easy to solve for the Syncro by using the 2wd elbow-flex hose instead, which is shorter. If this was for a 2wd Vanagon, you’d use that same elbow-flex hose but install the tank higher up and find a shorter formed elbow for the bleeder ring connection. 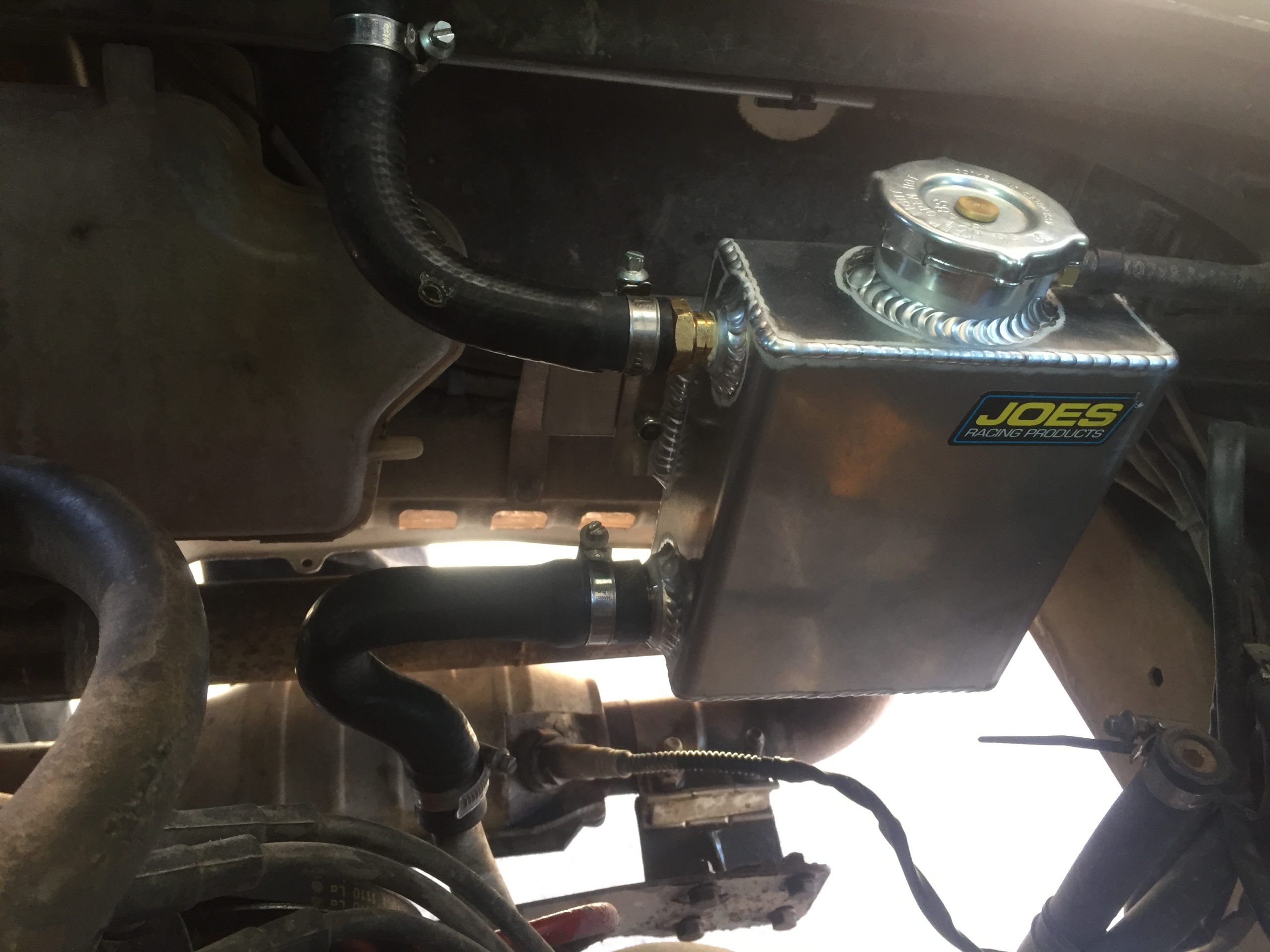 I don’t run with that giant, oppressive OEM muffler heatshield, I always found it unnecessary and with it gone engine access is so much better. You do need to shield the lower crossover pipe’s coupling hose, and the plastic part of the oil filler neck, but those are the only bits that ever suffer from the radiant heat. With the shield and p-tank support gone, my p-tank was supported by two metal bars bolted to the body instead, which give two bolt holes in basically the same location relative to everything else as the stock p-tank stand. So, leaving those bars in place, a short length of 1 ½” alu angle, a few holes in the right places, and the new tank bolted up in the same spot. 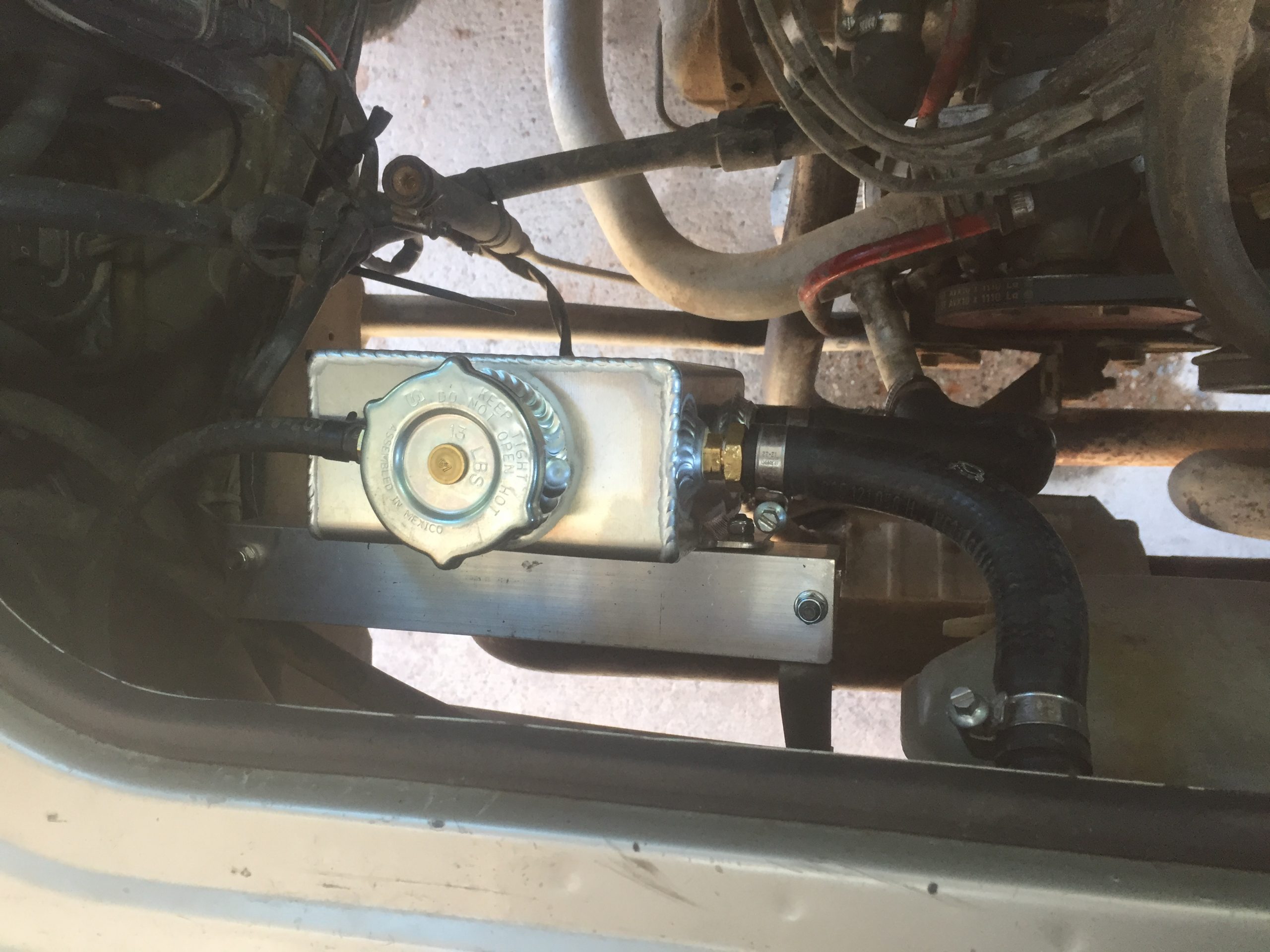 The new GW copycat tank features a sight glass, which the RMW one lacks, and some folks think it’s the cat’s PJ’s. Me, I could never say for sure what the coolant level was in the milky plastic tank even when it was brand new, and the clarity doesn’t improve as it ages (I anticipate same for their sight glasses, sorry to say), so being able to see the liquid level was never something I relied on. Instead I’ve always found that with a good p-cap I could count on watching the reserve tank to tell if the system was losing coolant, and the OEM level sensing system was always pretty reliable as well. But now I also lack a coolant level sensor. So I have a few choices: run as is, most cars don’t have a coolant level sensor anyway and they manage just fine. Or buy RMW’s metal level sensor and add a bung for it to the top of this tank. Or get GW’s little circuit board that adds an audible warning when the coolant temp gauge goes high. That’s only $40, easy to install, and I don’t hate GW or anything, they do come up with some original stuff and this seems like a good little gadget to have. In my experience if coolant level is dropping fast from a leak or rupture, overheating is seconds later, so in that event the audible warning is more useful than the visual-only warning anyway (as long as I can hear it over the Vanagon’s churning symphony of awesomeness). I’ll probably go that route. The coolant level sensing system I disabled by just jumping the two pins in the sensor connector.